Built a 1:4 or 1:5 scale model/prototype like the WaterWalker model that is big enough for 3 people to take a kite powered ride along the South side of Anguilla. The legs were 20 feet long. I have done several seastead models but this was the first large enough to play on. 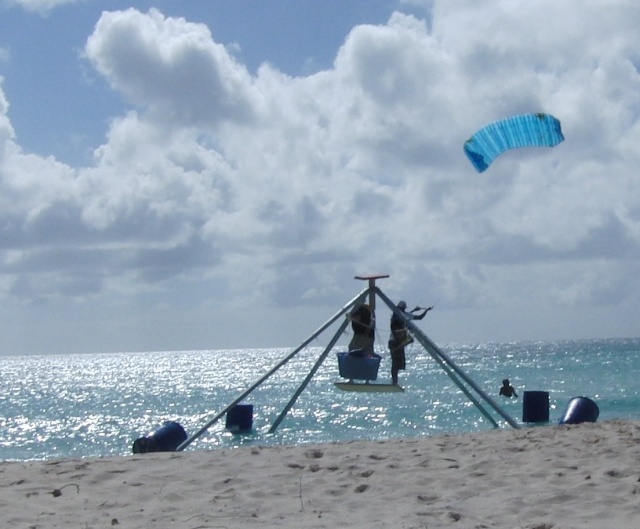 The barrels are 54 gallons which is 432 lbs in fresh water and a bit more in salt water. The plastic underwater should float so only about half of the 20 lbs of the barrel really counts, or 10 lbs. The ropes holding the base in shape will probably be underwater and should nearly float.

Might fill lower part of steel tubes with foam so they float. This would add a bit extra flotation.

If we had an aluminum box beam that was thick enough to weld to we could close off the end and make something to attach to at the same time. A 6 inch square aluminum box beam would be great. Aluminum is a better choice for a production model but it costs much more so I am not using it for this prototype.

There have been several design decisions that I puzzled over.

My current plan is to do a 2 to 4 mile route that is mostly downwind and never far from land. Will go into the water at one beach and then get out of the water at another beach 2.5 miles over, or maybe the West end of that beach for a 3 mile trip, or if things are going really well a beach even further for about 4 miles. The wind is normally from the East and we will do this on a day when that is so. Will have a person in Hobie Outback nearby and may change people during trip. The kayak may pull the model a bit south at the start if the kite has any trouble pulling the model south enough to clear land 1/2 mile from start.

Things to bring on experimental voyage 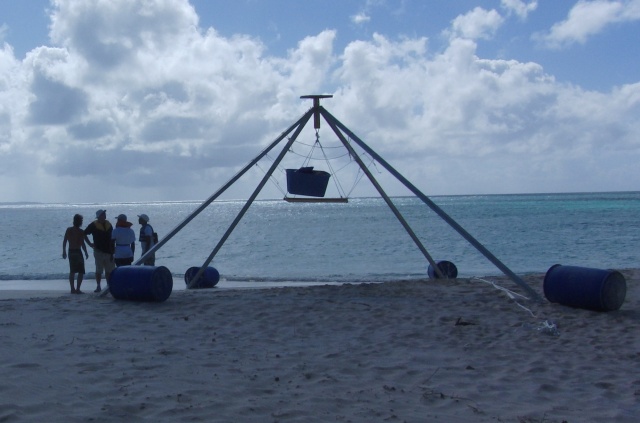 Miguel and Vacquelin did most of the construction for WaterWalker2. They were home from college for Christmas and heading back on Jan 8th. So the last day to launch was Jan 7th and we were in a hurry to do so. Vacquelin is the one who has done any nice sketchup drawing that I have posted.

We had 3 people on the Seastead, Vince, Miguel, Veselin. Vacquelin was in the Kayak, and Bob Hettinga was the land based photographer and responsible for getting any needed rescue boats.

We had the seastead folded up with the main rope still on when we drove it to the beach. It is a bit difficult to raise and lower when closed like an umbrella. It is easier to lower the center all the way down, but to do this you have to take off the main rope around the ends of the legs. It is also easier to load on a car one leg at a time than altogether and we only have to remove 6 bolts to take off the 4 legs. 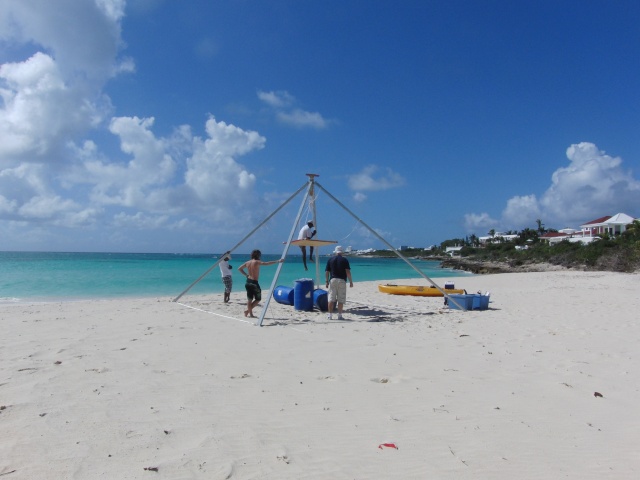 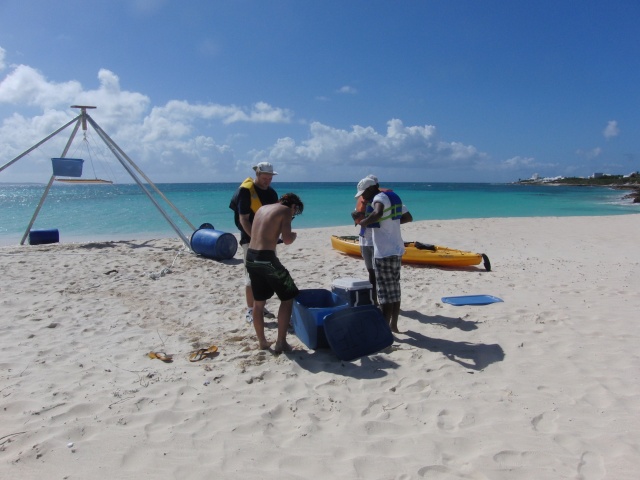 In this plot of the GPS data we started at the upper right dot and head left and down some under kite power. Then we are working our way past rocks curving up, left, and then down. Then a dingy pulls us down and back to the right where we anchor.

The data says that the first line (kite portion) was 654 feet at a heading of 249 degrees. This is probably about right and means we did like 21 degrees South of West when the wind was going West. The kite was probably pulling us more like 45 degrees south of West. Our track was a compromise of the wind push and the kite pull. The GPS says we did this 654 feet in 12 seconds, but really it was like 8 minutes which would be around 0.9 MPH. This is faster than predicted.

I think the GPS went into a sleep mode after getting bored waiting to launch. Wish we could have had better data during the kite portion.

The write brothers first flight was 120 feet. The first seastead ride was longer.

Vacquelin was actually able to pull the seastead even in this strong wind, but it was hard to see the progress when in the water.

There is a User:Vincecate/WaterWalker2Page2 with more information, pictures, and videos.