Ferrocement or ferro-cement (also called thin-shell concrete or ferro-concrete) is a system of reinforced mortar or plaster (lime or cement, sand and water) applied over layer of metal mesh, woven expanded-metal or metal-fibers and closely spaced thin steel rods such as rebar. The metal commonly used is iron or some type of steel. It is used to construct relatively thin, hard, strong surfaces and structures in many shapes such as hulls for boats, shell roofs, and water tanks. Ferrocement originated in the 1840s in France and is the origin of reinforced concrete. It has a wide range of other uses including sculpture and prefabricated building components. The term "ferrocement" has been applied by extension to other composite materials, including some containing no cement and no ferrous material.

One significant potential problem with Ferrocement in the marine environment is spalling due to corrosion, which is almost impossible to prevent in the long term, as concrete is porous and inevitably penetrated by seawater over time. This problem can be mitigated by making the cement thicker, using coatings, or using reinforcements that are more resistant to corrosion. However, all of these slow the progress, not eliminate it. Only by replacing the reinforcement with completely inert substances like Basalt or Glass fiber can this problem be eliminated. 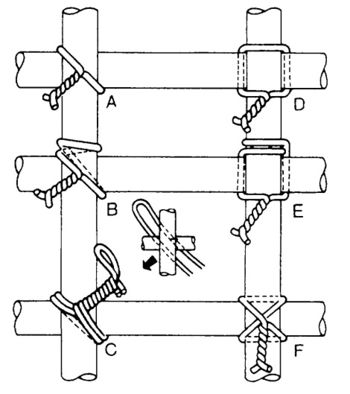 SNAP, OR SIMPLE, TIE – The snap, or simple, tie (view A) is simply wrapped once around the two crossing bars in a diagonal manner with the two ends on top. The ends are then twisted together with a pair of side cutters until they are very tight against the bars. Finally, the loose ends are cut off. This tie is used mostly on floor slabs.

WALL TIE – The wall tie (view B) is made by taking one and one-half turns around the vertical bar, then one turn diagonally around the intersection. The two ends are twisted together until the connection is tight, then the excess is cut off. The wall tie is used on light vertical mats of steel.

DOUBLE-STRAND SINGLE TIE –The double-strand tie (view C) is a variation of the simple tie. It is favored in some localities and is especially used for heavy work.

SADDLE TIE – The wires of the saddle tie (view D) pass half way around one of the bars on either side of the crossing bar and are brought squarely or diagonally around the crossing bar. The ends are then twisted together and cut off.

CROSS, OR FIGURE-EIGHT, TIE – The cross, or figure-eight, tie (view F) has the advantage of causing little or no twist in the bars.

Traditional Ferrocement construction may benefit from a rebar replacement material made from basslt fibers: