From Seasteading
Revision as of 09:47, 8 November 2008 by Crasch (talk | contribs) (nflatable Roof for Heathrow Airport Central Bus Station, an order from National Express, was commissioned to Lindstrand Technologies by D5 architectural firm. The D5 proposal was radical, and was so asymmetrical that no two of its 3000 fabric panels were)
(diff) ← Older revision | Latest revision (diff) | Newer revision → (diff)
Jump to: navigation, search 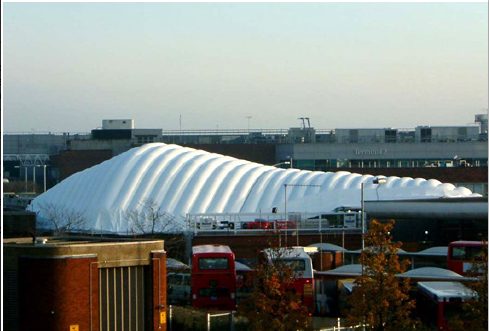 The D5 proposal was radical, and was so asymmetrical that no two of its 3000 fabric panels were the same. The inflatable roof for Heathrow Airport was one of the most complex projects that Lindstrand Team has accomplished.

The inflatable roof took seven months to design and construct, but was actually installed in only one night in December 2005.

The Heathrow roof has 30% light transmission, which allows sunlight to penetrate during the day, and makes the building glow attractively at night.