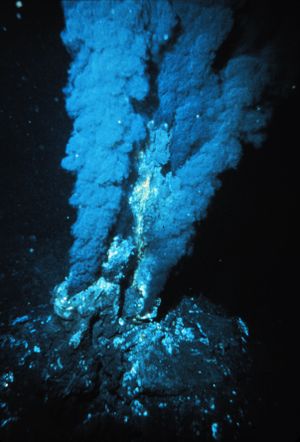 A [1], a type of hydrothermal vent

Hydrothermal vents typically spew out superheated fluid as high as 407 degrees Celsius at velocities ranging from 1-5 m/s. The vent openings are anywhere from a few centimeters to more than a meter. The 1-5 m/s flow happens at depths of typically 2,500 m below sea level which is under pressure of about 200 atmospheres. The vents are powered by the weight of seawater above forcing itself into fissures within the Earth's crust which is then returned to the ocean as a continuous, superheated geyser.

In the closed loop system embodiment, a loop of insulated pipe would go from a floating platform or ship on the surface, down to the ocean floor, next to or in the hydrothermal vent flow, and would return to the ship or platform. A heat exchanger placed within the hydrothermal fluid flow would heat working fluid which would then be directed to the surface and used for power generation. The cooled clean working fluid would then be returned to the sea floor and be reheated. 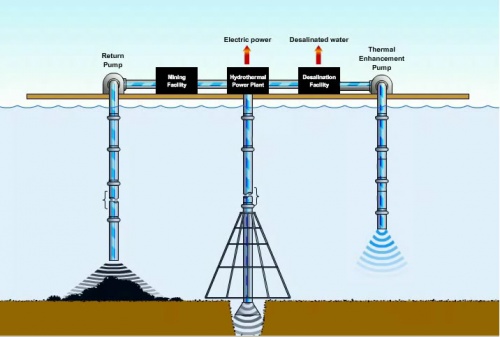 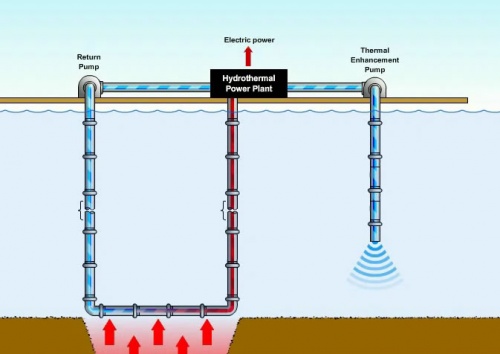 A 3m opening and 3 m/s flow at 350 degrees Celsius would create a flow of 21,205.73 L/sec, which translates into 29,298.77 MW of raw power before any losses or inefficiencies are taken into account, calculated as the reciprocal of the amount of energy needed to raise that volume of water to that temperature. In comparison, the largest fission nuclear reactors at one plant in the U.S. provide 4,000 MW of power.

When using the open-loop configuration, the Marshall Hydrothermal Recovery System proposes to capture the ores that are being ejected from the core of the Earth before they can settle to become hydrothermal veins. Hydrothermal veins (hydrothermal vents of the geologic past) are the original source of virtually all surface mines in the world. The ores are among the richest ever harvested, and because of the huge variety of metals and minerals in the fluid, mining promises to be as valuable as, or perhaps even more valuable than the energy that will be produced.

The depth of the hydrothermal vents at Juan de Fuca plate is about 2500m, well within reach of conventional oil rigs. But other technical challenges remain.

Heat exchangers and highly insulated pipe must be designed and built specifically for the purposes intended.

For the closed system careful calculations of heat loss and energy availability must be made prior to construction, and appropriate working fluid must be chosen.

Subsea construction is always difficult, and Marshall Hydrothermal, on track to build the first Marshall Hydrothermal Recovery System, will have to solve major primary engineering challenges on a scale of those faced when building the world’s first nuclear power plant. Materials and procedures must be utilized to deal with the chemical content of vent fluid, and selecting the best method of exchanging the heat and the best working fluid for a closed loop system will be an immediate concern.

The laying of submarine cable is a complex operation that will take several months to accomplish, but it is a well-understood and a relatively routine procedure.

The most economical means of recovering the ores from the mining products must also be determined.