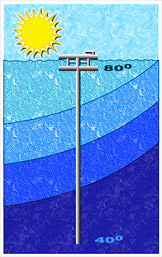 Power requirements for pumping and system operation are typically 50-75% of gross power output. One positive side effect is that some styles of open cycle OTEC can produce significant quantities of fresh water in addition to power, as a natural byproduct of the thermodynamic cycle. This obviously poses significant benefit to a seastead.