Difference between revisions of "RELEASE: Vote with your house" 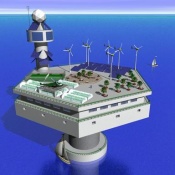 If the Seasteading Institute has its way, you will soon be able to relocate your house--or even your entire town--as easily as you move your car.

"We are going to build permanent floating settlements on the ocean. The first prototype will likely be built in the sheltered waters of the San Francisco Bay, but future designs will be capable of withstanding open ocean conditions." says Patri Friedman, founder of the Mountain View based non-profit. The Institute recently received some substantial backing for their approach, in the form of a $500,000 grant from Paypal co-founder Peter Thiel.

Unlike some past projects which envisioned enormous, multi-billion dollar cities, The Seasteading Institute advocates a modular, incremental approach, where cities are built up one block, or even one house, at a time. Patri says: "Cruise ships already demonstrate that people can live on the ocean in big, movable buildings at reasonable cost. We've got a slightly different design: we're going to build a city out of interconnected floating platforms. That way you'll be able to move cities, and take your house and yard with you! And we are designing these platforms to be comparable in cost to high-end land-based homes."

Friedman and many other "seasteaders" are motivated by a desire to try new forms of government:

"The founders of the U.S. intended for the states to be laboratories of democracy, experimenting with different laws to compete for citizen. But so much power has been centralized by the federal government that now states have very little freedom to experiment. And all around the world, people feel alienated from their governments."

The seasteaders believe that their cities will restore that competition. "Modern democratic governments are often unresponsive to the needs of their citizens. Our floating cities will change that - if you don't like your government, you'll be able to pull up anchor and sail to a better one, or start your own. Imagine the reduction in worldwide violence if Israel could just move away from Palestine, Georgia from Russia, or Hong Kong from China. On floating cities, this is actually possible!"

Seasteading advocates point to the Netherlands as an example of a country that is gradually moving to an aquatic lifestyle. "In the Netherlands, many homes are built on floating platforms moored to canal bottoms. If the sea levels rise, the homes simply float on the water." Dura Vermeer, a Dutch firm, also recently deployed a prototype floating greenhouse.

"Unlike the Dutch floating homes, we plan to build unmoored platforms suitable for the high seas,", Friedman says. "So we have to solve additional problems, such as how to stay in one area without an anchor, and how to deal with big waves and storms." He also sees positive environmental aspects: "Seasteads will be well-positioned to use wind and solar power, and of course, seasteaders will not require cars. That means the environmental footprint of the seasteading lifestyle will be far smaller than on land".

To help solve some of those problems, the Seasteading Institute will be holding its first annual conference in Burlingame, CA on October 10th.