A BunkerStead is a minimalist design for a spar seastead, where the spar does not reach high enough above the waterline to avoid having its top submerged by the taller waves. Its purpose is to fill the lower range of seastead price and size while retaining ocean-going capability, possibly enabling individual owners to take to the sea and join a seastead compact.

Because the BunkerStead is supposed to be sealed shut when waves risk being taller than its emerged height and might wash over it, it might require solutions for transporting people and things to and from other seasteads even during bad weather. Because the zone being washed by the moving surface of the ocean is exceedingly dangerous during those periods, and because the BunkerStead does not reach above it, the only area left for this transportation to occur safely is below this zone: deep enough underwater to avoid the waves' surfaces entirely.

The simplest method is to have a diving well inside the BunkerStead at the waterline, that connects to a hole through the spar somewhere around 15 to 20 meters deep (so it would remain below even the tallest rogue waves), for going in and out of the stead by scuba diving. Guidelines loosely connecting those holes would allow reaching other seasteads with relative safety. No decompression steps are necessary after staying up to 30 minutes at 20 meters depth.

Sealed tunnels with water-proof hatches could also be extended between seasteads for this purpose (doubling as supporting struts keeping them spaced) but the mechanical stresses from heaving and axial shearing make this solution very impractical. A sealed or pressurized "cable-car" (a captive, non-autonomous submarine ?) running between the seasteads underwater would make more sense than such a permanent structure.

Since the main purpose of designing the BunkerStead as low-floating as possible is to reduce the interaction between the stead and the moving water surface, a logical evolution of this concept consists in seperating in halves a complete seastead, with one half almost completely submerged and barely reaching the surface while still maintaining some positive buoyancy, connected to the other half, kept far above it, through trusses.

The low half would be bulky, robust, can be shaped pretty much in any practical way (a sphere being mechanically ideal), will house the main, heavy support systems of the seastead (battery, generator, watermaker, refrigerated storing room, etc.), can be used as a tank or storage for supplies (being close to the waterline it should have easy access from a boat), tools and maybe small vehicles, as well as shelter during bad storms, or as an escape raft in case of a critical failure in the rest of the seastead (failure of either the connecting truss or the top half itself). The seasteaders may sleep there mainly, as it is protected from noise and is where motion is the most reduced.

The top half will be kept about 25 to 32 meters above the low half so it never comes into contact with even the largest waves, is to be lightly built and have a small frontal surface so it does not resist wind too much, and could house communication systems, weapons, and a variety of useful tools for basic trades and businesses needed to sustain the seasteading community while serving as the main workplace for seasteaders' day tasks. It could also include a few life rafts in case a critical failure hits the low half of the stead. This half can be flat and spread horizontally to give a lot of solar area. This part of the seastead is a good candidate for the intensive use of tensegrity in order to optimise the size and strength against the weight and wind drag. 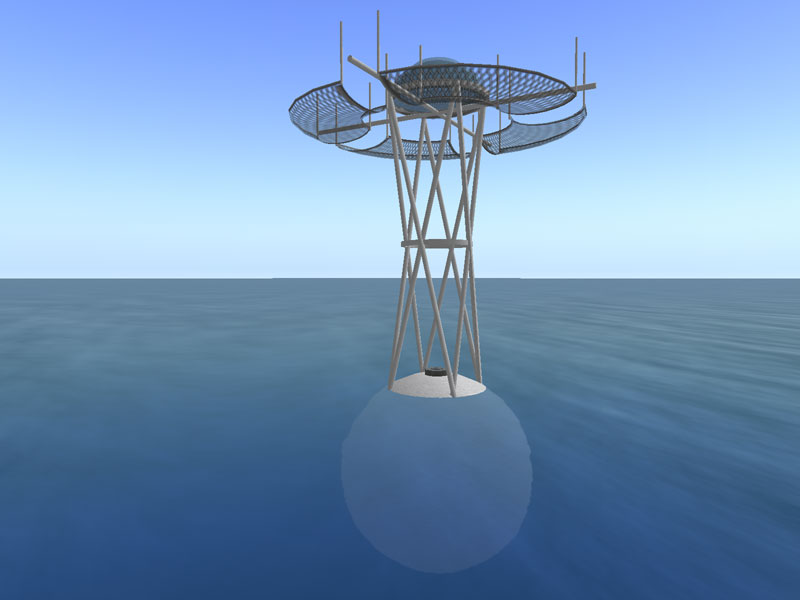 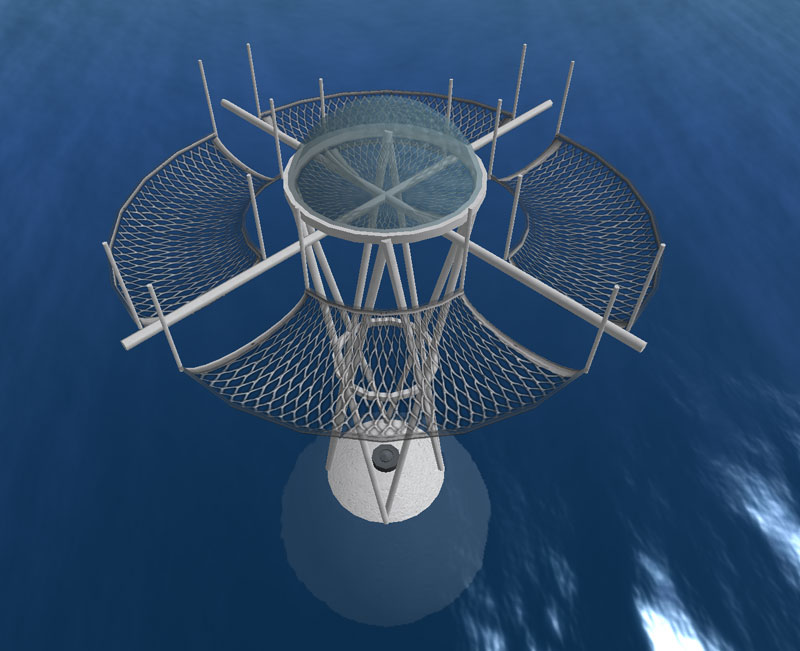