Dirt is extremely cheap. Therefore, if dirt can be given positive buoyancy, then floating dirt may make floating islands cheap enough.

The principle behind the Floating Dirt Seastead is to mash together ideas like the Artificial Atoll, the Mud Curtain and the Disposable Land proposals, in order to make a large floating, artificial island to settle upon.

Settling an island is an established possibility for homesteading the seas, however it usually comes with several disadvantages in the mid- and long-term:

The Floating Dirt seastead carefully avoids these two problems: by being mobile, it can be brought to the continent for the purpose of reducing import and export costs semi-permanently or on a regular schedule ; and by being artificial it can be easily expanded by producing and adding more floating dirt to the ensemble.

Therefore, a Floating Dirt seastead should be able to combine the comparative advantages islands have as a place to live in, without incurring their disadvantages.

A Floating Dirt seastead should be robust enough to survive the ocanic environment and its severe storms either by resisting wind and waves directly, or by being able to take damage from those. The latter solution is preferred so as to focus on the one main characteristic of this seastead design: dirt-cheap artificial land. To this effect the Floating Dirt seastead is made of two parts: the inhabitable main "land", and its breakwater/atoll. The former is destined to shoulder wave damage, while the latter aims at resisting wind damage. The main component of the floating dirt itself has to be made from a material that resists corrosion from seawater.

Some method for attaching something to the bulk floatation material is required - presumably, some sort of net, rope or support plate. This might usefully double as a mechanism for keeping the blocks together even through heavy deformation of the structure under large stress. Must not "fall through the island" under the constant motion of the sea.

An alternative is to use the same kind of building blocks, but with a variable size: piles upon piles of small blocks on the outside, bigger elements sticking together on the inner side, with larger elements in the middle, and elements large enough to have something tied to them, at the center.

The outer part of the seastead should be able to take large hits from big waves and other collisions, and transform most of the momentum into splashes (by resisting and thus reflecting the stress onto the incoming water or object) and/or into plastic deformation or internal viscous drag (rearranging its elements over and over with the waves, ideally in a perpetual cycle of outer-most blocks being piled back onto the inner-most then crumbling back into shape).

Because waves contain an amount of energy that grows with the square of their height, the larger waves are extremely dangerous and deal an amount of stress that we must (over)size the island after. A Floating Dirt seastead sized for open ocean might require a radius of "splash zone" up to half a wavelength of the highest wave it might encounter, which can reach up to 300 meters and more, meaning this zone's width may easily need to be 100 meters or more. Simply said, facing oceanic waves may require oceanic beach-sized absorption zones. This is why lowering the cost of the building material is so important.

This aspect imposes a high limit on down-scaling this design: viable seasteads of this sort start at a very large size and can only be made even bigger. Fortunately, absolute space comes in ample supply on the oceans, so the only truly important thing is the total cost of the structure, and not its final size.

The simplest method for resisting wind is to use a low profile with a reduced frontal surface exposed to wind and a low drag coefficient. This translates into designing the seastead to be low and wide/long with a globally smooth, round shape, rather than tall and with sharp edges.

Another possibility is to use something to dampen or deflect the effect of wind, for example vegetation or artificial hills.

By using an extremely cheap floatation material, a Floating Dirt seastead can afford a very high ratio of mass to net buoyancy which makes it extremely stable and comfortable. In addition the ablative approach chosen against wave and wind damage means most of the big stresses inflicted upon the seastead are transformed into plastic deformations (and/or dissipated as internal viscous drag, if the building material is/contains a fluid) instead of being transferred to the structure as momentum, further increasing stability and comfort.

The disadvantage here is that high mass-to-net-buoyancy means poor mobility, so a compromise between oversizing the island and speed must be found.

The one crucial design focus of this seastead design is on lowering the cost of the main construction material, preferably through mass-production using the cheapest base materials available in bulk. Recycling garbage such as used plastic bottles into floating dirt is a viable option. Moulding floating base elements from a cheap material such as concrete (or a buoyant equivalent) might do, too. Filling plastic bags or tubes with a mix of air and oil can, too.

There are many ways to explore, but not all may provide a material that can fit the damage-absorbing requirement defined above. The ideal choice of building element is probably composed of a single material and not a composite, otherwise it might lose some of its properties under severe or localized stress.

What we need here is some form of large grain of sand-like building blocks that can spontaneously stick together to some extent and have a small positive buoyancy. Hydrophobic material regroup together spontaneously in water, but not strongly enough to build upon. Many soft and sometimes porous materials might have the required mechanical features, but most of them rot away over time (tree bark chips, bale hay)...

Cost estimate: a rather "small" 250 meter long, 150 meter wide and 40 meters tall ellipsoid that is half emerged corresponds to a total mass of material of 500 000 metric tons, regardless of this material's raw density, so estimating the cost means multiplying the per-ton price of the material by 500 000, assuming volunteer work. Incremental construction is a godsend here (layer after layer). With concrete at 70 cent a cubic yard (which is 2.7 tons, so price is 26 cents per metric ton) building this out of concrete would cost $130 000 worth of concrete. However transportation and handling of concrete is what costs the most, and adds up to bring the price per ton to $8, for a total of $4000000 of building material + shipping for the entire seastead. The current slump in real estate, housing and construction might bring those prices down a lot especially in China, which is the world's biggest producer. With the raw cost defined here varying with the cube of size, any acceptable decrease in size translates into huge savings (a 120x80x32m base ellipsoid comes out at roughly a fifth of the figures above).

At half a million tonnes this seastead would also near the heaviest, largest supertankers ever in tonnage, giving it ample cargo capacity, and it would provide a ludicrous 6000 square meters of protected useable land in addition to immense (27000 square meters) beach space to play volley ball on during sunny days. Even though it is extremely simple to build, the sheer amount of materials and the size would put this seastead roughly on par with the Humber bridge as both a landmark and a project.

Expanding each part of the seastead (breakwater and main) should be as easy as pouring some more of the main building material at one end, and possibly pat it with a shovel (or run a rolling press over it) to make it compact enough. The plastic capability of the outer part should make it easy to join several such seasteads together without threatening their capacity to resist storms (the material acting as its own fender buoy). This also makes transboarding cargo and passengers to and from visiting boats extremely easy in most weathers.

Notes on this design

By taking the more traditional shape of an actual island, instead of near-boat or near-oil-rig shapes, this design might make it easier for the rest of the world to treat it as an independant piece of land and not a boat sailing under some existing nation's flag, in turn making it easier to have the independant sovereignty of its inhabitants recognized internationally. This might prove invaluable when moving through territorial (or claimed as such) waters. The legal arrangements reserved for embassies would ideally apply when the floating island stops by a port.

Maximising the total size against the total value of the seastead discourages structural attacks. It is easy for an hostile navy to try and sink a boat-like seastead (or group of such seasteads), but no one in his right mind would attempt to sink an island. Additionnally, a design that can shrug off damage from large storms can most probably shrug off damage from air bombings too.

And lastly: this design is likely to produce the prettiest of all seasteads, once complete with their wide lush gardens and their long beaches fending gentle waves and their lagoons attracting exotic fishes.

A big dumb rock can survive pretty much anything.

If a "soft" floating dirt structure is not robust enough for open ocean, a hard one may be viable, if it is large enough to compensate for the loss of plastic deformation.

The idea is to build a large lens of some extra-cheap material with low positive buoyancy, in a pebble-stone shape starting at 250 meters diameter for around 40 meters of height, basically mimicking the top of existing small islands.

This design is basically an oversized and simplified Geodesic Vessel.

Dry-dock construction of sorts is possible by simply digging a hole of the suitable shape and size in the ground next to the sea or some waterway, placing the optional rebar net, hardpoints, tubes and tanks and coffers for "basement" rooms along with floatability material as needed (recycled bottles, foam, anything goes), and pouring in the concrete or other suitable material (melted thermoplastic, resin, etc.), then letting in the sea and floating the entire thing away. 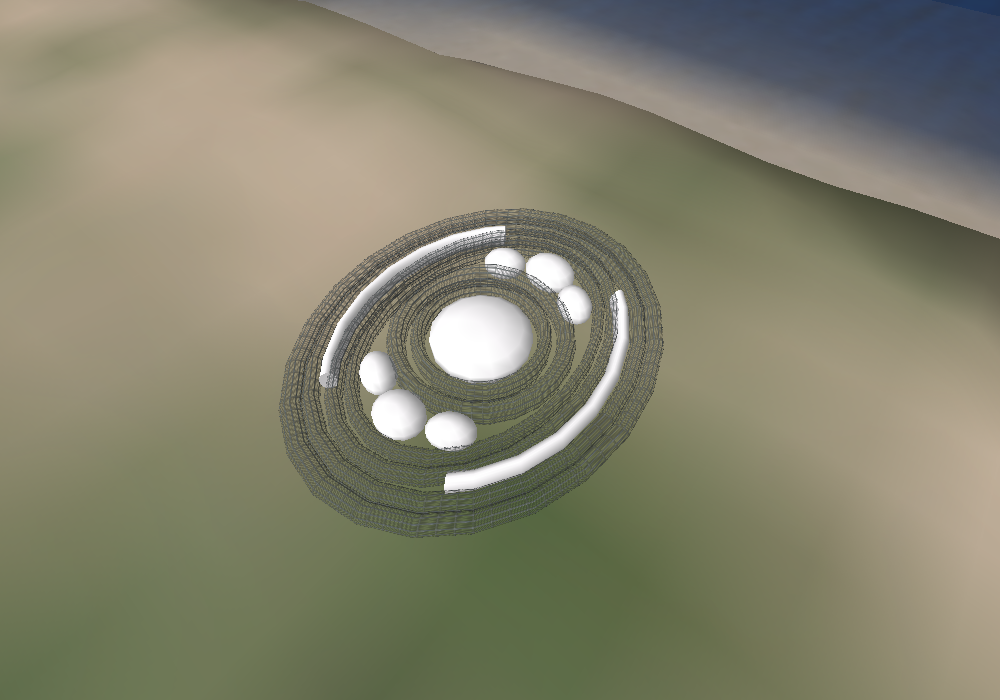 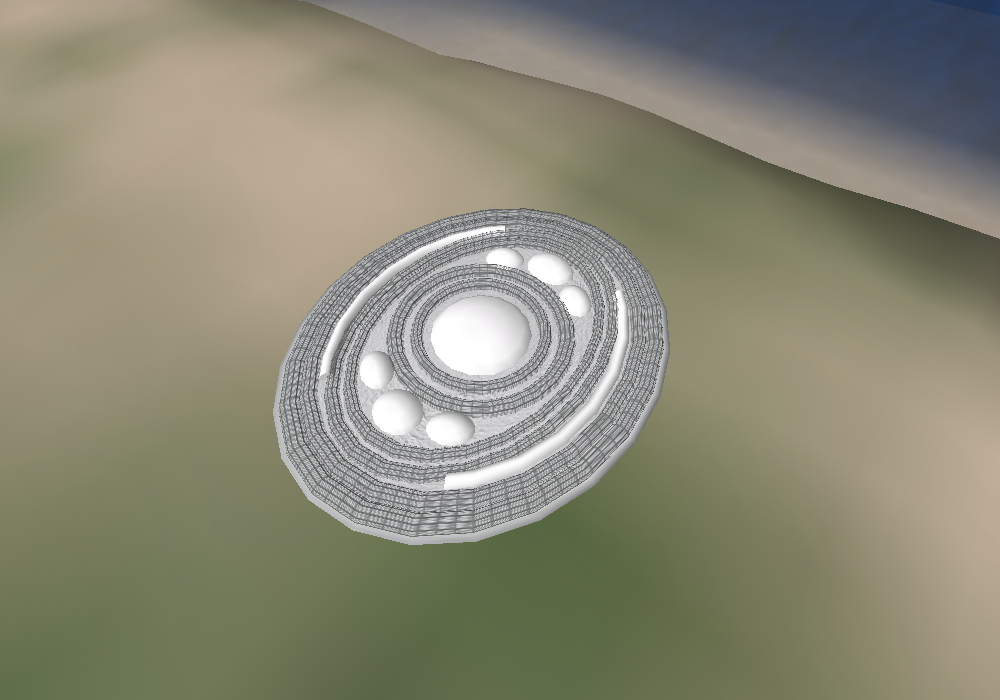 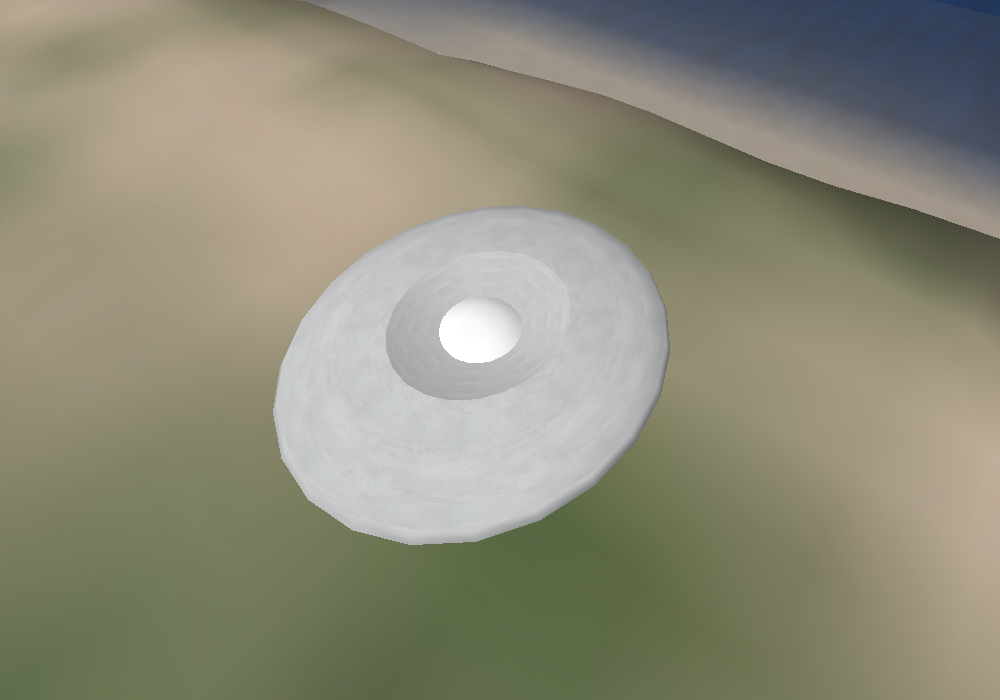 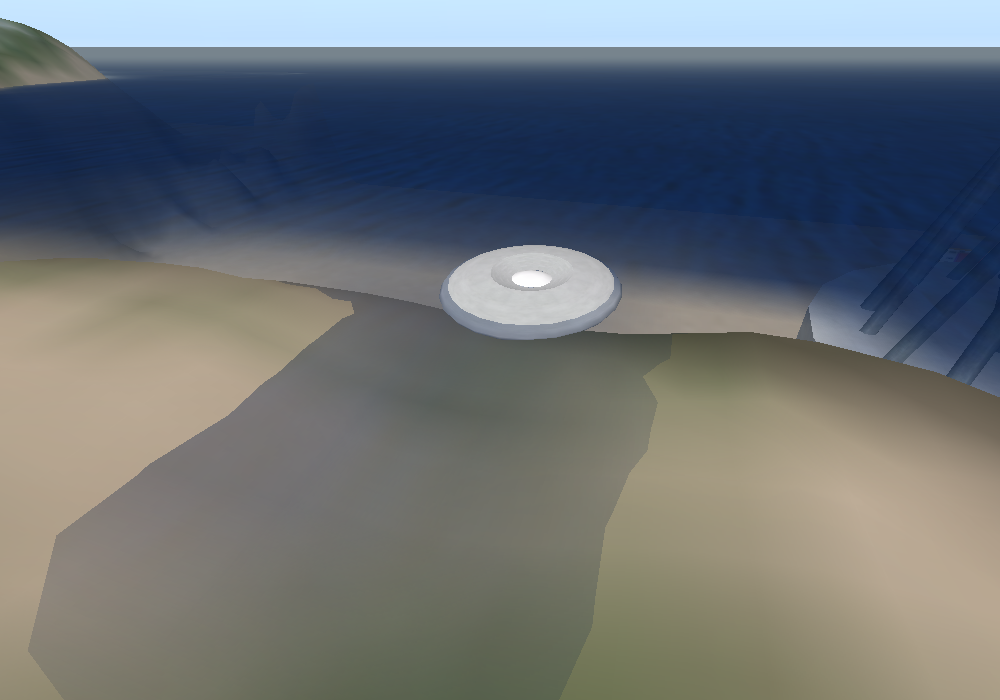 The "hard" version of Floating Dirt seastead can, too, be built in two seperate parts by simply carving a circular gap around the middle section of the "lens" so that it floats inside a slightly larger hole within the rest of the seastead, giving it several degrees of freedom from it: <(O)> The outer shell then acts as a breakwater for the center part, maintained in place by a few large balls of foam or inflatable rubber.

This solution comes down to a breakwater bay with a large ballstead within. Any range of size and thickness of either part may prove practical ultimately.