From Seasteading
< User:Joep
Jump to: navigation, search
This article is a proposal. Your comments are more than welcome on the talk page.

3D software, even SketchUp, and me will probably never be friends, so I've used MS Paint. One advantage is that even the design looks cheap. 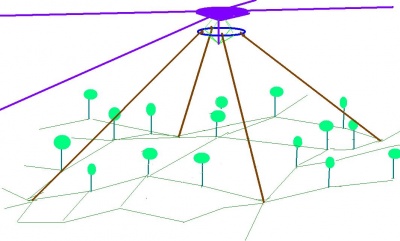 Not included in the design is anything on top of it, it just focuses on a cheap way to make a relatively stable platform (represented in purple).

The design is a copy of both WaterWalker and WaterWalker2 with some changes:

The green lines in the bottom are ropes that keep the poles together and are used to attach buoys to at the same time. Only a few buys are shown, but there would be many more. The poles are attached to the ropes below the water, and to a ring on the top that allows them to move a little. Attached to the ring is also a vertical bar with 4 different ropes that allows it to move in every direction. A fixed grid made of steel is attached to the bars on top of each WaterWalker.

Because there are so many buoys, losing one of them, or one of them losing its buoyancy wouldn't be a catastrophe and replacing it should be considered normal maintenance. So there are many options to create them. The cheapest solutions seems to be buoys made of polystyrene. The simplest solution would look like this: 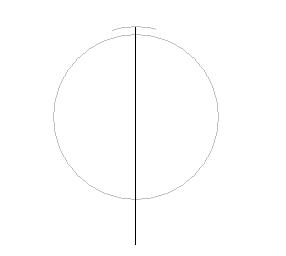 A ball (or any form) of polystyrene, a hole from top to bottom and a rope that is attached to the top with a stop (or a knot in the rope).

A bit stronger (and probably a lot better for the environment) would to put the polystyrene in a bag made of stronger plastic or canvas. The rope would be attached more firmly and the polystyrene wouldn't be able to break off.

The poles could be made of wood which is a lot cheaper than steel. It's household material for ships, so would probably last for a long time. One pole breaking wouldn't create catastrophe btw, they can also be replaced easily.

The expensive part would be the metal parts, like the grid on top.