Difference between revisions of "User:Vincecate/FloatingVilla" 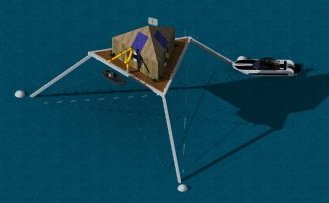 This type of seastead plan is an example of the Protected Waters strategy that should lead to a Single Family Seastead and evolve into full seastead communities. We plan to start out someplace where the waves are not too big.

Rental houses in Anguilla are called villas. This proposal is to make money renting out early smaller seasteads off the coast of Anguilla. After we get a few seasteads operational, it could be called a "seastead resort". It is a bit like overwater bungalows in Tahiti but floating instead of on columns. I made a video on this idea for Seasteading 2009 conference.

In Anguilla there is no income tax or sales tax. However, there is a "hotel tax" or "visitor tax", officially covered in the "transient persons act". Basically there is a 10% tax on any room rented by the day or week. There is also a 10% service charge for the staff, though this seems to be a guideline or regulation and not exactly law.

There is a boat stabilizer for while at anchor. If we put one of these under each corner it could dissipate enough energy that bobbing would not be a problem even for a spar/cylinder shaped float (instead of a sphere). It might be good to get an even larger stabilizer made than the standard sizes.

A nice thing about round floats is that up/down motion makes a wave which gets rid of that energy. There is no memory of the last wave that can get things bobbing up and down out of phase with the waves.

It should be possible to make floats that are more spar shaped (small waterline area) but still have this feature of getting rid of up/down energy by making a wave. It is sort of a compromise between a ball and a long skinny pole. Just have a float that is pointy at the top and bottom but wider in the middle. Then as it goes up and down it will make a wave, so it will not bob out of phase. This is safer than a pure spar shape if the stabilizers fail. It also sort of helps the stabilizer.

The Dynex Dux rope is strong and has minimal stretch. This would work well for the ropes in the structure.

I plan to get an engineer to spec out the parts with for aluminum and also steel. Then I will get prices for those parts and an estimate for the welding. So should get a better estimate of the cost. Not sure yet if aluminum or steel is the way to go.

Would need a "business license", but this is not usually hard to get, particularly for a local.

A foreigner working in Anguilla would need a "work permit". The support work is best done by locals. By this I mean maid service, maintenance, water taxi, etc. If people came down to assemble a seastead and were not getting paid (strictly volunteer) there should not be any problem.

If I build something and play with it, people in Anguilla probably won't care. However, a seastead would need a "boat license" if it has a motor and tourists were going to go on it. Could start without a motor and maybe not rent to the public. A boat license takes certification by some place outside Anguilla. At NMMA, the first place I checked, this certification would cost about $2,500 plus travel costs. So this is probably affordable, though it may be more than this as this design will be very different than what they are used to certifying. The seastead would probably be classified as a "house boat". We might need to test it for a year or something for people to get comfortable with the design. It may not be reasonable to expect to have paying customers on what is really an experimental prototype. Or maybe engineering, CAD design, and simulation is advanced enough these days that this is reasonable.

I sent the NMMA people a link to my tension circle page to check if they could certify such a thing as a boat. Their answer was if it had propulsion and/or the US Coast Guard would issue me an MIC (Manufacturers Identification Code) designated for boat builders then they could. I could get an MIC code or have someone with one build the vessel. We should understand how to use large low RPM propellers for efficient movement at slow speeds, so putting an engine on is something we need to do sometime anyway. Even with kites for open ocean, I think we need engines for harbors.

If it does not have motors/engines/sales/kites but is just a floating house it is not clear what it needs.

How to get Anguilla Planning Permission

It seems that I should get Anguilla planning permission if it is going to be a villa. I played my Seasteading 09 talk and had a short talk with a couple people in planning. They thought the idea was interesting and told me I need to write up a proposal and then it goes before the board. I expect to do this.

There is a villa tax. It might be treated like a boat too, it is not clear. Other questions, like do I pay duty if I bring it to location but never land it on shore? 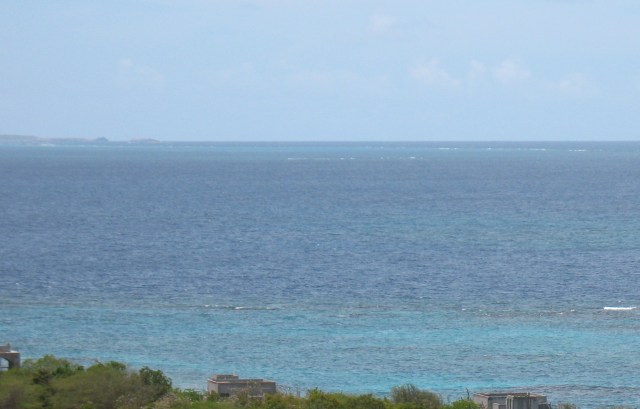 The location I like is a nice spot north of Anguilla. It is on the downwind side of the island and inside a reef while a few miles offshore. So it is sort of out in the ocean but sort of protected so the waves are not too bad. Here is a chart showing that the dark blue area in the first link just inside the reef is about 20 meters deep. It is far enough that people won't notice it much. It is almost an "out of sight is out of mind" situation. If you are paying 10% to the government and not bothering anybody I don't think there would be any trouble. It is also not far from my dome and within line-of-sight from a building I have on the top of our hill. So about 3 miles offshore, 4 miles from a good harbor, and around 5 miles from my property (picture above is from my property). Another nice thing about this location is there is a water taxi based in the nearby harbor. The view is wonderful, the wind is nice, the reef amazing, the water clear, and not many people around. I think it is a location people would love to spend time at.

Going the 4 miles to the harbor could take 10 to 20 minutes one way. It would be nice if there was entertainment near the seastead. Be good if people could have enough fun things to do that they could stay by the villa most of the week. Some possibilities are:

Anguilla has a hotel named "Cuisinart" that has a hydroponic greenhouse. Tourists find the tour of the greenhouse very interesting. A similar thing could be done with the seasteads. Perhaps a combination of a micro-version of the Eden project and the floating greenhouses developed by Dutch firm Dura Vermeer? Fish farming could be fun. Anything we were experimenting with, testing, developing could be of interest to someone who picked this vacation spot.

This a relatively easy first step that should be profitable. Being close to land avoids the problems of communication and transportation. At this distance the regular cell towers work and there is wireless Internet. A good harbor being 4 miles away makes getting people and cargo there easy. The island has an airport so people can come from all over.

This lets us test out prototypes and make money from them. If we can make money off our R&D efforts, then the capital investment needed to get to the final goal is much smaller.

Could make versions with Big Efficient Propellers so it could move around slowly. Could make larger versions. Could test in deep ocean waves.

Over time we can put seasteads outside the reef and further and further out. If there is a storm coming we could bring the seasteads back inside the reef (maybe leave an empty one out in the storm for testing). Eventually we would have a group of seasteads that we trusted enough to go out into the open ocean.

If we want to take tourists on Migration routes we will need licensed boats to go to the islands. So going through the license procedure is something we will need to do anyway.

This is an incremental plan. It has a very low initial cost. It makes money along the way. It eventually gets to our goal of seasteads out in the open ocean.

Making a model that fixed problems found in first model and tested float idea. Might even try to model stabilizers.

This place sells cylindrical steel buoys from 2.9 M long and 1.6 diameter up to 4.4 meters long and 2.5 meters in diameter. I think what we need is in this range.

A huge buoy called SeaFloat. The one in the picture is too big.

These 58-inch spherical steel buoys have 3000 lbs buoyancy so 3 would give 9000 lbs. We only use half the potential buoyancy on average, so 4500 lbs usable for us. We probably need larger unless the I-beams above are too large. This same place says cylindrical buoys can be made to order.