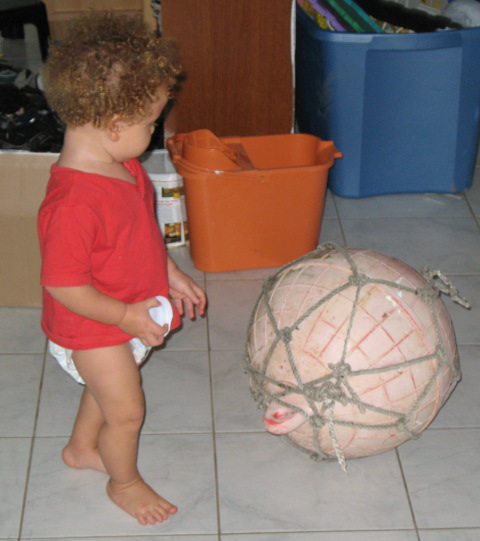 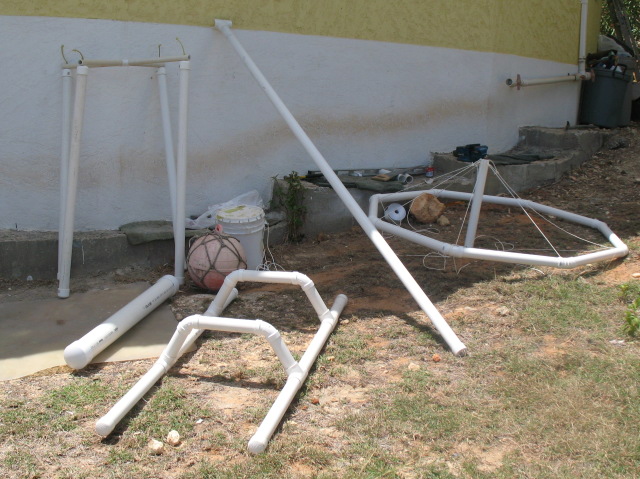 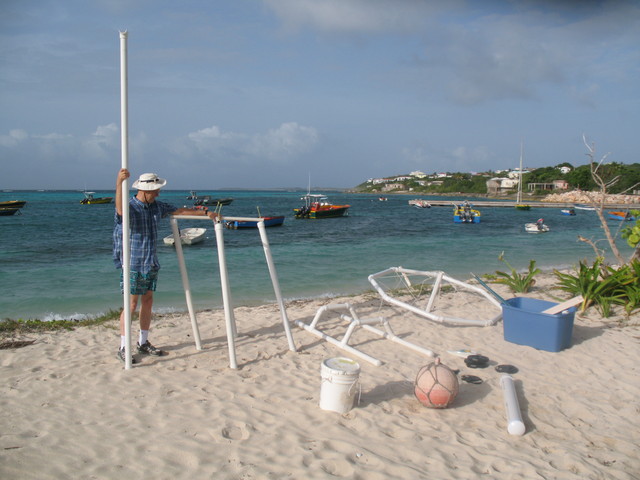 The plan is to use similar amounts of plastic in 7 different models that are each 1/25th scale and compare them in similar wave conditions in Island Harbor, Anguilla.

I am going to assume migration makes 25 foot waves the largest we have to deal with because with a 1:25 scale model that makes for a nice round number, a 1 foot wave. This also means that full scale versions need to be able to move at between 0.5 and 1 MPH, so I will try to measure the force needed for the corresponding speeds in the models.

With a 25 foot maximum wave measured trough to crest, we sort of only need 12.5 feet above average water level. But with rogue waves and safety margins, lets design for 25 feet above average water level. Seems like a spar with 25 feet above water could have a total length of 250 feet. Scaled down for 1:25 model we could use 10 feet of PVC pipe. If I use 2 inch diameter pipe in the models that is like 50 inches diameter in the full scale version.

Cost estimation sort of indicates that the same weight steel ships are about the same cost. So if PVC in the models is replaced by steel in the full scale versions, equal weights will be roughly equal costs. However, the ratio of model thickness to prototype thickness is not going to be the same for all the different models. Also, these models are not all the same weight. So I don't claim that these models are really a fair comparison but close enough that we may learn something.

Models not yet planned

Cameras and methods for shooting video

Shot video from a kayak, a pier, the model, and while floating in a lifejacket near the model. The last method is my favorite. I had a PVC version of a "poor man's steadycam" to help keep the camera steady and out of the water while my arms were underwater. It is nice to have some land or pier in the background so you can have some idea how much the camera is moving when you watch the video. I used a Vivitar 6200W waterproof camera and am happy with it. It was about $120 and has 6 megapixels and shoots video at 320 by 240 which is perfect for youtube. I put in a 2 GB flash card and this was plenty for holding the videos. Had trouble accessing the videos over the USB cable and so have been taking out the flash card and putting it in a flash reader on my computer.

Some videos had a cup of water on the model to help see how stable it was. How much water the water moved and also how much was still in the cup at the end both give some idea of how stable it is. I tried to use different colors for different days. Washable paint from my child's craft supplies worked well.

When the camera is on the model and the cup is in front you can really see the motion of the water.

It is nice to see waves coming toward the model so I try to have the coming waves in the background.

A camera in a tripod at the end of a pier works well. Just put the model in the water upwind a bit and let it float toward the pier. This way the camera is stable and dry. So you can use any camera you want. I used a Canon Powershot A640 which I like.

The video we shot from a kayak had too much camera motion.

If you shoot at regular speed and then slow down the video it has pauses or is jerky. If you could shoot at 5 times the normal frame rate then when you slowed down by 5 it would be the normal frame rate. Then slowed down video would not look like it was slowed down. It would look natural and more like a full scale prototype would look. If I could justify it I would love to have a $3,000 camera that shoots 120 frames per second. You can see an example of slowed video shot this way. Found a $1,400 camera that does 300 frames per second, nice but still too hard to justify. A froogle search for fast frame rate cameras shows several with 60 fps that are cheap. These would be better than what I used. If anyone knows of anything with 120+ fps for less than $1,400 please list it here.

The force on a scale model should scale with the mass, which is with the cube of the scaling factor. So for a 1/25th scale model, the force should be 1/15625. So we have:

With a known weight being pulled down by gravity you can provide the same force to the model by connecting a rope between the model and the weight over a pulley. Just have to keep pulling the pulley forward at the right speed so that the weight stays between the pulley and the ground or water. With my Hobie pedal powered kayak I think this will be easy enough.

However, a similar weight and pulley walking alongside a pool is probably easier. So I may just do that. But the deepest pool I have access to is just over 6 feet deep.

With speed results from this we can see how fast such a kite could pull a full sized seastead. This will tell us if the migration idea is plausible.

For the weight on our force meter I could use a water jug where I can adjust the amount of water to see what works.

We had one model sponsored:

I used Windows Movie Maker to process the video. Here are the steps I took to make a compressed and slowed video for youtube of less than 10 minutes (their limit):

To investigate spar leaning I was thinking of ways to measure the wind speed. I have an idea I like but have not yet tried. The idea is to have a measured 10 feet along the beach in the direction of the wind and release a balloon just beyond the upwind end of this while shooting video. When this video is slowed down by 4 and watched on a player with a pause button it should be easy enough to measure how long the balloon takes to cover the 10 feet. Then 1.467 feet per second is 1 MPH.

Can setup the camera on a tripod and start filming, then walk over to release the balloon. Can then edit out the walk over.

Could also do without the tripod if had a board on a string holding down the balloon. Could then pull the string to release the balloon while holding the camera aimed in the right direction.

This section is for subjective impressions of the experimenter.

First, the spar models are very sensitive to having the right amount of ballast. If it is too much waves can go over the top and if it is too little they have so much out of the water that they lean over. Also, spar models lean in simulated hurricane winds without any model house on top. I think there will be a leaning problem with a model house and simulating more typical wind speeds (hard for me to get down to those wind speeds with the trade winds in Anguilla).

Long spars are not going to be able to get close to some harbors. My 10 foot spar model could not get into the harbor closest to my house. A full scale one would have trouble getting within 20 miles of this harbor. If you have to go that kind of distance in a small boat to get to shore, people are not going to go ashore much.

The tension circle leaning and sideways movement compensate each other so that the two together is not as bad as either they would be alone. So while the structure has some movement the water in the test cup has very little relative to the cup. If I were to start building a half-scale seastead today, it would be this type. Probably use 1 foot diameter aluminum pipe. I would anchor it a few miles offshore where the water is still shallow here, and try to rent it out by the week.

There is a thread on this model testing in the forum.