From Seasteading
< User:Vincecate
Jump to: navigation, search
This article is a proposal. Your comments are more than welcome on the talk page.

The idea is to use a tension circle to hold a house up. Having the flotation very wide makes it stable. The house does not need to be so far above the waves because it is floating up with the large waves. Does not need to go deep into the water because stability comes from the great width.

If the outer circle were made from a large pipe, maybe 36-inch sched-40 stainless steel, it could be be used for compressed air energy storage. This would store plenty of energy for the average family. Could even be used to power motors for maneuvering in a port. But for extra safety it is nice to have the outer ring filled with foam. Might have the column below the house be a big pipe that was used for compressed air.

First two are slowed down by a factor of 4 (should be 5 but don't see how to do that in Windows Movie Maker): <youtube v="oOYGjGbfmZI" />

This is small waves. The water stays very still in the container even though the whole thing is tipping because the movement and tipping compensate each other just like they do for some water in the wave. These are about 3 inch waves which is simulating about 6 foot waves.

If the real full scale ring was 144 feet across, it would be 16 times bigger than this model. The rules for scaling models state that time is faster in the model by the square-root of the scaling factor. So I have slowed down this video by a factor of 4 to see the time to move back and forth when a big wave comes. The 1 foot wall becomes a 16 foot wall, with 8 feet above water and 8 feet below in the full scale prototype.

You could have net under the whole structure, attached to the outer circle, to make a place for aquaculture. Fresh water fish farms use automatic feeders where the fish bump something and then get a piece of food. With these no food is wasted. Don't know if salt water farms use these but I expect they could.

One possible problem is that moving through the water would be harder with a big net underwater.

I would like to build a model that was large enough for two people to float around in and then have a kite pull me and someone else downwind alongside Anguilla. Some kind of larger pipe for the outer circle seems like the way to go for this. Probably this is in the 6-inch to 1 foot diameter range with the whole circle like 30 to 50 feet across. Some surplus metal pipe might be welded together. But another way is some HDPE large flexible plastic pipe which there is excess inventory specials. This pipe comes in colors like blue, orange, and black. For this kind of pipe a 1 foot diameter pipe can be bent with a 20 foot radius, so I could make a 40 foot circle. The two ends are then heated and fused together. It is a relatively inexpensive type of pipe and it does not take any fittings. So the overall costs would be low. For safety it might be good to have 3 or 7 smaller pipes bound together. Or the pipe could be filled with foam. Or both. 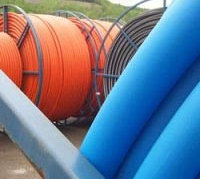 The big problem for playing with a large model is getting it back upwind after ridding it down. There is the snake mode where we open up the circle into a line and then easily tow it back. There is a way to put a flange on the ends so that I could bolt and unbolt it. Indusa Inc in San Juan (200 miles from Anguilla) 787 723 3450 Danny Moldenato has some pipe and can order more. An 8-inch pipe rated for 160 PSI is $25.26/foot in San Juan. They can put flanges on the ends, getting a price quote for that. A 12 inch pipe rated 80 PSI is $19.50/foot in US (don't know shipping yet). They come in 40 foot pieces, so I might get 4 pieces. Shipping to Anguilla should be reasonable.

Another interesting possibility is to have some kind of inflatable tube. Then we could just deflate it to pack it up and go home. So this would be a really nice way to go if it could be affordable. Not sure of a reasonable source for this though. Might be able to use parts from a bunch of inflatable kayaks/rafts. Some seem to have a separate chamber for a nearly straight piece on the left and right sides. So if we wanted an 8 sided model we might have to buy 4 rafts. Maybe.

Another possibility is to get a long piece of 4-inch pipe and make 7 circles with this and bind these loops together with rope. Then when it was time to go home I could undo the ropes, coil up the pipe, tie it, load it onto a crane-truck, and go home. Could just have a cap on each end of this long pipe. It is almost like a big stiff garden hose really.

There is special equipment for pipe fusion with the stuff for 4-inch pipe costing $1,455 for a 4-inch fusion kit, heater alone is $476. Larger pipe stuff seems to be more like $10,000. Some other fusion equipment might be cheaper.

If I used 200 feet for the 2 person test, I could use that same pipe as part of a tourist sized one later. So the $1,200 would not be wasted. We could have the upper cables attach to the platform, so that it was held level by the cables. Then the central pillar could just be an aluminum pipe or aluminum beam with a ball-joint in the center of the platform. It seems like $20,000 to $60,000 we could make something that is big enough for people to sleep on (maybe target student market). Then I could anchor it off Anguilla and try to rent it out like a villa and maybe make money. If it rented for $500/week it could be cheap compared to hotels and really cheap compared to boats. Could probably get $1,000/week. If I could get enough commitments ahead of time, this could be a very reasonable business. Put your name here if you would rent a week. 1/2 :-)

Above was my first drawing in sketchup.

This was an artist impression but not what I had in mind.