Nice Vinceate, so simple, so elegant.

The size of the legs.

I was just wandering of the size of the legs for a real sized Seastead, when I thought that they do not have to be that big. If you cut the tetraherdon with a horizontal plane, you get a triangle supported by three balls. You do not change anything to the stability, except to lower the gravity center, which is always a good thing.

Well, you can go as far as lowering the height to the height of the balls, like putting a plate on three balls. Althouh ineastetics, this shows how much space you can get with the principle. Of course, you need balls bigger than the bigest wave, which may be not so easy to do on a scaled model.

The form of the legs.

Then I thought a bit further, why not replace the legs by curved bows joining the balls two by two. You keep a nice structure where you can hang anything needed and with the exact same stability.

And, while we are here, you can give the upper infrastructre the form you want. What is above sea is in facts a matter of architecture.

The number of floating devices.

You propose to increase the number of balls to 6. Interesting. May be used to collect energy as you suggested.

Why not to build something like the one in cbthiess' note. If I understood the design, interferances wave cancel each other and erases almost totally in the center. The material does not matters, just the grid form. 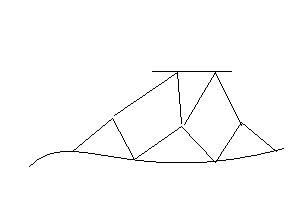 As a single WaterWalker more or less averages the wave heights, my guess is that a double (or triple, or..) layer of Walkers would almost completely remove all movements, which is nice for the inhabitants and offers an enourmous amount of energy. The construction might be difficult and costly, though. Joep 18:47, 24 November 2008 (UTC)

Fun idea. If you just make bigger and bigger WaterWalkers they will tilt less and less for the same size waves. Vincecate 02:01, 27 November 2008 (UTC)

How about not using balls but three tubes (possibly with small balls below the surface). Advantage: the small area at surface level (=low movement) and a big cut in costs because no more ballast is needed. Joep 12:58, 25 November 2008 (UTC)

Yes. The barrels that I am using in my 1:5 scale model are a step in that direction. I might have them tied to the corners so they float vertical above the corners. I have two reasons I might not like this. One is that it might let the barrel hit the leg. The other problem is that the legs end up lower in the water. Vincecate 02:07, 27 November 2008 (UTC)