The videos are great, gives me a bit of a Myth Busters feeling, the result obviously being True :)

How about increasing the living space doing something like this?

It would make the design extensible in length as well (and probably you could line up several of these also). Joep 00:55, 9 January 2009 (UTC)

As you have that drawn it seems it could fall along the direction of the main line either forward or backward. The square could not fall even with hinges at the joints. Vincecate 03:13, 9 January 2009 (UTC)

Nice. Wow, 270 gallons for $35 would be amazing. Great for the telephone pole sized version. I did have water getting into 2 of my barrels by the way, but maybe the lids were just not tight enough. Vincecate 03:15, 9 January 2009 (UTC)

I think the flexible column thing and WaterWalker could be combined using longer ropes and a lot of barrels. A big horizontal movement of a barrel has little or no effect on the whole structure, and because there are many barrels, the vertical force on a barrel (actually, the difference in being submerged or not) would even out. 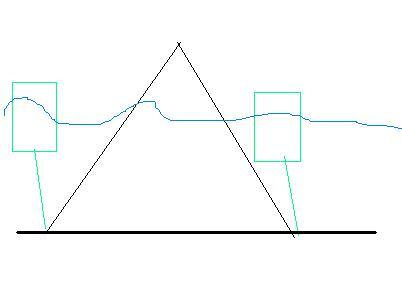 The idea is to have a grid like 10 ft below the surface (depending of wave heights of course), kept afloat by lots of barrels, with triangular structures on top of it. The barrels wouldn't need to be actual (pretty expensive) barrels but could be anything cheap that floats and can be fixed easily (used polystyrene in canvas bags?). The rest of the structure would be made of simple poles (and of course, living area :)). Joep 02:53, 17 February 2009 (UTC)