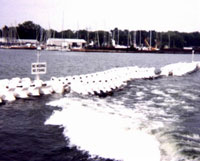 Rogue waves are unusually tall waves that appear spontaneously on the open ocean. Their source remains somewhat of a mystery, but rogue waves are a topic of significant scientific and mathematical study due to the damage they cause to ships, platforms, etc. Rogue waves are capable of sinking, and have sunken even very large ships.

Recent research finds new ways to model and possibly predict them as described in a Quanta Magazine article from February 2020 titled "The Grand Unified Theory of Rogue Waves". The article summarizes both Linear Addition and Nonlinear Focusing theories and describes a new way to combine both into a new theory.