From Seasteading
< User:Vincecate
Jump to: navigation, search
This article is a proposal. Your comments are more than welcome on the talk page.

Idea is that a ball shape seems to ride waves really well and provide the best internal volume to surface area ratio possible. A ball shape is strong structurally. With a 30 foot diameter ball you could have two good floors and extra storage space. Should be enough for a family. This is probably about the lowest cost structure with enough space that is still safe on the open ocean. This is very much like User:Vincecate/GeodesicVessel but with no stability from the shape of the structure. This really needs something to stabilize it.

One way to stabilize the ball is with a HangingBallast. There would be ropes going to a single ballast well below the ball (like 500 feet below).

Another way to stabilize the ball is the way Life_rafts do with a water ballast under it. This is just something that traps a bunch of water. The mass of water provides more inertia so that waves can not tip the ball as easily. This should provide a very smooth ride. It also avoids the problems of having to raise and lower the hanging ballast to come near land. So it is probably better.

The geodesic shape should mean you don't need as much, or maybe any, internal bracing. This can open up the inside space and make it cheaper to build.

If we could make a form for concrete or plastic this could be really cheap. In Anguilla they make forms for poring cisterns where the two sides of the form are connected together by pieces of metal which stay in the concrete. There is a way these are released from the form so the form can be taken off. I think a similar thing could be done to make a 30 foot ball mold work. If so this could be crazy cheap.

Some size ball could be made using rotomold methods, not sure what limits there are on how thick or how large an object could be made this way.

Molded plastic or aluminum pieces, or steel or aluminum plates, could be make to approximate a sphere using some interesting geometric shapes.

Living space above the sphere

Like in BunkerStead it would be nice to have some living space that was above the sphere and had lots of windows. I would probably have it close to the top of the sphere though. Model tests show that even the top of the sphere should be very safe from the waves. However, people would clearly go below if there was a storm that seemed dangerous. Might fold in/roll-up/take-down some stuff if there was a bad storm coming. Wind or wind blown spray from a wave might be able to damage things. Would use User:Vincecate/Migration to minimize the chance of storms.

Should be very strong, very stable, very safe, and not very costly for the amount of living space.

Could use small strong glass to make portals to let some light in and let people see out some.

The heavy things like batteries should be at the very bottom of the inside space (say below a flat internal floor). 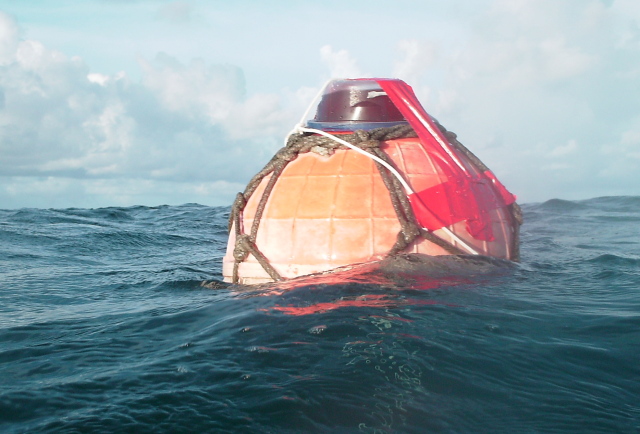 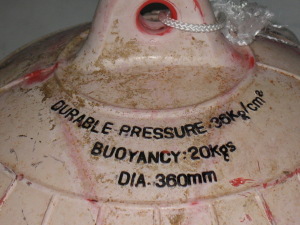 The first video is with about 4 feet of rope in waves that are a few inches (6 inches simulates 12.5 feet). This was shot near the end of the pier in Island Harbor Anguilla. This swings back and forth too much. Experiments on later days with longer ropes work much better.

The next 4 videos were shot on Aug 28, 2008 after swimming to deep water on the other side of the inner reef at shoal bay. I estimate the biggest waves are simulating 50 foot waves, which is bigger than I expect to ever see if we use migration.

The first video below is with the 20 lbs of weight tied close below the ball, maybe 1/2 foot of rope.

The rest of the videos on this day are with 23 feet of rope between the ball and the 20 lbs, in the same big waves as the video above.

During this next video I was drifting closer to shallow water so stopped early. There are a couple times when the ball seems to tilt a bit. It may be because the weights had touched bottom and the tension on the rope was reduced. But either way, this ball is still doing a good job of keeping the topside up in really large waves.

This next shot is fun because there is a jellyfish in the upper-right part of the shot. It is also interesting because in about the middle of the clip we get the underwater view of a breaking wave hitting and tipping the model.

The videos in this section were shot from a kayak on Aug 31, 2008. I took the net off the buoy and put some black lines on to make it easier to see how much the buoy tips with the waves. These were shot outside the reef north of Island Harbor Anguilla. The kayak rudder does not work when you are nearly standing still so peddling did not work so well. I could not use the paddle while keeping the camera aimed, so that was not good either. I tried giving my 4 year old the camera, but in hindsight, I should have explained the goal of keeping near the buoy and had him use the paddle while I did the camera. Anyway, these are mostly not close enough to see how well my water-level with a new block inside to dampen the sloshing is working, but sometimes. I have since realized that I could take apart the paddle and use half in one hand as an oar to control my direction while my legs provided power. So I think I can stay closer to the model next time.

I would call these simulated 40 foot waves, which is more than I think we will see if we use migration. Used the same 23 foot rope used in the Shoal Bay experiments.

In this next video we got close enough at times to really see the red water moving around. Even though the buoy is staying very level, the waves are accelerating it sideways and so causing the red water to move around. Now these are simulated hurricane conditions, and not normal weather. If you were in a small bunk with sides on it or in a seat with a seatbelt, you would be fine.

This next video was shot by Teryn, my 4-year-old, while sitting on the front of my kayak. The a lightweight boy on the front moves up and down more than a big dad in the middle. But it is still interesting.

I think it would be reasonable to make a 30 foot ball out of HDPE plastic. If this has "carbon black" in it the sun won't hurt it. I am thinking that if the plastic was 1 inch thick it would be plenty strong enough. A ball is a strong shape as the sides sort of have arch type support in both directions. Think of how strong an egg is when you try to squeeze it in your hand.

The density of HDPE plastic is just under that of water. If you buy the HDPE pellets by the ton, the price is about $1/lb. So a 30 foot ball that was 1 inch thick might weigh about 15,000 lbs and cost about $15,000 for the raw plastic. It may even be that 1/2 inch is thick enough. This would be a very low cost seastead.

You could have an inner and outer mold connected by bolts to hold the right spacing between the molds. After pouring you take out the bolts and the molds come apart in sections. Then you plug the holes in the ball with HDPE plugs (fusion weld these in).

Another possibility is related to how they wind on the plastic for large corrugated plastic pipe. We could go around and around making a ball instead of a pipe. Maybe we put on a two inch wide strip of plastic each time we go around. Might take a machine most of a day to make a ball but this is not bad.

My favorite way is to have a big ball rotomold out of aluminum. This 30-foot aluminum ball would be set on some wheels so it could be rolled in different directions. Probably 3 or 4 wheels with 1 or 2 that can turn and an electric motor on one or more. If we put the HDPE pellets inside, start rolling the mold, heat it up, and keep rolling the mold while it cools down we can have a big plastic ball when it is done. This "rotomolding" is how most kayaks are made so easily that they can sell as little as for $240. The mold would have to come apart in sections so we could get the plastic ball out.

There is info about roto-molding online.

There are lots of places that sell stainless steel spheres or hemispheres that could be used for molds. Shipping gets hard above 8 feet diameter, but they can be made whatever size you want it seems. With two hemispheres you could make plastic balls using the rotomold method (though some work will need to be done to figure out how to heat and roll the mold). Could start plastic ball making experiments using 12-inch steel hemispheres from shopwagner.com for $37 each.

The Ductal concrete blend is very strong, waterproof, and lasts well in salt-water. This could work well for making a larger model or full scale BallHouse.

The ball does not heave up and down like the pipes/cylinders/spars do so it would not require heave plates. Having the ballast rope attach to the bottom of the ball provides enough stability, no truss is required. The experiments show that this design does well even in 50 foot waves. A ball shape is strong for the amount of material, whatever that is: plastic, concrete, aluminum, or steel. So I think for small single family seasteads that are safe on the open ocean that this is the low cost design champ. If you think there is anything cheaper please post in the discussion for this page or on the Engineering forum.

I think this ball could even be made smaller, like 20 feet diameter, or even 15 feet diameter, and still be very stable and safe. Because it floats up with the waves, and moves away and so kills breaking waves, it can be safe in waves higher than it is. It would be easier to get plastic to work for a 15 foot diameter ball than a 30 foot diameter ball. The internal volume would still be better than many boats people live on. At this size it could be cheaper for a family to buy a Ball House than to pay to be smuggled into the USA.

Some Chinese worried by the movie 2012 built ball shaped survival pods. These were for sale for $50,000 before the Mayan end of calendar and one expects much cheaper after that.

This proposal has been discussed on the forum.